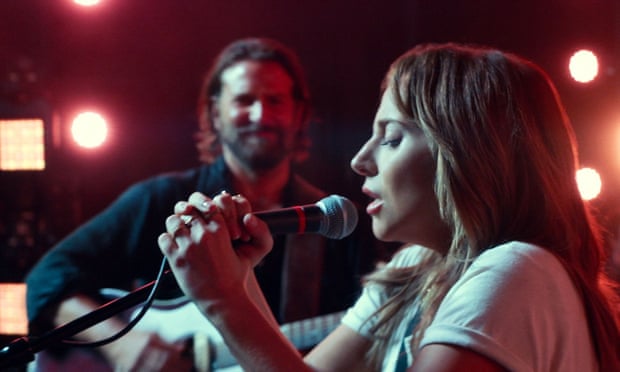 On a flight to Canada with my mother I watched this film, which is the one about Jack, an ageing alcoholic cock-rocker, played by Bradley Cooper (who also directs), who meets, discovers and falls in love with up-and-coming pop singer Ally, played by Lady Gaga. The film is a loose remake of two previous films and the plot is broadly formulaic (her trajectory is upward while his leads down into the bottom of a whisky glass, with tragedy ensuing) yet I nevertheless found it quite affecting and my hard heart was melted by the sad ending (curiously a slightly different sad ending to the one I expected, which may or may not be one similar to the Judy Garland and Barbra Streisand previous versions).

One thing I found mildly amusing was that Jack meets Ally when she is performing in a bar most of whose performers are transvestites. To me this seemed like an ironic nod to how Lady Gaga was once dogged by strange rumours that she was secretly a man (or a transsexual, or a something (you know how it is with rumours)). I was also struck by how this was a film without villains. Ally acquires a manager who is set up to some extent in opposition to Jack, but while he is a bit smooth, to me he does not come across as a bad person or as someone exploiting Ally; when he vetoes a joint tour between Ally and an increasingly erratic Jack, he is clearly doing so to protect his client. That said, his actions do precipitate the final tragedy, but the real villain here is alcoholism and Jack’s inability to moderate his drinking.

To some extent Jack and Ally are presented as inhabiting briefly overlapping musical words, his one of blues-bore country rock and hers a more pop sound. Somewhat surprisingly I did find myself thinking that Jack’s music sounded a lot more appealing than the pop stuff (though I suppose the film’s director is going to give himself the good tunes). I may have to start investing in records by Stevie Ray Vaughan and similar.

Finally readers will be pleased to hear that this film features Sam Elliot (the cowboy from The Big Lebowski). He basically plays the same part as he does in The Big Lebowski.