Worldcon is what they call the World Science Fiction Convention. My past form with Worldcon write-ups is not great: my account of Loncon was impressionistic and my more in-depth multi-part report on 2017’s Helsinki Worldcon remains unfinished. Nevertheless, I am now going to attempt to describe my time at this year’s Worldcon, the 77th, which was for the first time held on the island of Ireland, in Dublin. Programme events took place mainly in the Convention Centre Dublin, with spillover events 15 minutes away in Point Square.

For me this was a rather different event to the previous two Worldcons I have attended. I went to London purely as an attendee while in Helsinki I found myself doing a small amount of work in connection with the Hugo Awards, but frankly not that much. In Dublin however I was pretty busy with important Worldcon business. On the one hand I had the wonderful title of Hugo Trophy Wrangler, which basically meant that I had the key to the rooms in which the trophies were stored and spent much of the convention taking trophies in and out of the rooms and in and out of their boxes. I also did some volunteering on the information desks. Together these meant that I had far less time to attend programme items than at previous Worldcons (and when I had the time I was often too frazzled). So in a way that makes this easier to write, as less programme items attended = less programme items to write about.

The first actual panel I attended was one of the ones taking place on Thursday morning, just as the convention opened. This saw Heidi Lyshol, Robert Silverberg, Jukka Särkijärvi and Jo Walton discussing this year’s Retro Hugo finalists. As you know, the Retro Hugos are awarded for years where there no Hugo Awards. Dublin was awarding Retro Hugos for works published in 1943 (which would have been awarded in 1944 in an alternate universe in which a Hugo-awarding Worldcon took place that year). I am fond of the Retro Hugos, as many of the authors and works they honour are ones whose output appeared in the SF anthologies I read when I was first exploring the genre. This year I found myself researching Retro eligible material that people might want to nominate for blog posts that appeared on the Worldcon website; I also found links to where most of the Retro Hugo finalists can be read online, so I felt particularly engaged with the process. 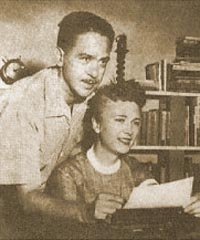 If you have read the Retro finalists then you will surely agree that the stand-out work is the novelette “Mimsy Were The Borogoves“, published under the pseudonym Lewis Padgett by C. L. Moore and Henry Kuttner. Moore and Kuttner, writing either together or separately were astonishingly prolific in 1943, managing to have at least one work in each of the four fiction categories. And yet the husband and wife team are not that well known today. Robert Silverberg offered two theories why this is so. Firstly after Kuttner’s early death his agent started demanding ludicrously inflated fees for reprints of his work, which meant that it tended not to appear in anthologies and so dropped out of public consciousness. C.L. Moore meanwhile did not suffer an untimely death, but her tendency to write under pseudonyms meant that she never acquired the reputation her work deserves. Perhaps the Retro Hugos will lead to an upsurge of interest in their work.

Beyond that there was much discussion on whether voters and nominators for the Retro Hugos should approach it with the mindset of today or attempt to do so as someone would in 1944. This is an argument that came up when I was researching the Retro eligible material (I recall someone telling me that Tintin comics should not be nominated as no one in US fandom in 1944 would have been aware of it). Hugo Administrator Nicholas Whyte spoke from the floor to say that no instructions are given to voters and nominators as to how to approach their task: as with real elections they can choose themselves the basis on which they will assign their vote. My own view however is that people of today can only vote as people of today and that it is simply impossible to realistically insert yourself into the mindset of the 1940s. Furthermore, the idea that people should vote in the Retro Hugos as a fan of the 1940s would vote is dangerously American-centric. SF fandom was basically a North American thing back then, and if we are to say that the Retro Hugos can only be voted on from a 1940s mindset then the votes of those of us from the rest of the world will be deemed less valid. Nevertheless, nominators and voters for the Retro Hugos are free to choose the approach they want; members of next year’s Worldcon will be able to nominate whatever material they like from 1944 for the 1945 Retro Hugos that will be awarded in New Zealand.

I had then hoped to attend a panel discussion on gothic literature (unlike SF a genre in which Ireland has historically excelled) but it was full, so instead I found myself at a manel on the Irish oddball writer Flann O’Brien (who also wrote as Myles na gCopaleen and whose real names were Brian O’Nolan and Brian Ó Nualláin), which featured Frank McNally, Nicholas Whyte, Pádraig Ó Méalóid and Nigel Quinlan. I was impressed that they managed to get half way through their panel before mentioning the thing in The Third Policeman about cyclists who have exchanged so many molecules with their bikes that they start displaying bicycle characteristics (while their bikes start going a bit human); this is pretty much the first thing everyone learns about Flann O’Brien.

When I came out of the Flann O’Brien panel I found the Convention Centre’s narrow corridors to be getting a bit overcrowded as people leaving panels became entangled with those queuing for the next ones; Dublin was starting to run into the congestion issues that had bedevilled the beginning of the Helsinki Worldcon. Fair dues however to the Con Ops people, they seemed to have this issues under control by the afternoon thanks to assiduous queue marshalling. In the meantime I paid a visit to Point Square, where I attended an interesting session of the Worldcon academic track. Unlike the panels, academic track sessions see brainy people present short papers. Academic track participants tend to be academics and not popular authors, but they make up for their lack of fame by being able to frame interesting arguments and the format allows for the well-developed exposition of intriguing ideas. At any Worldcon I have been to the academic track events are always a highlight, and Dublin was no exception.

At this academic session I caught three fascinating presentations, with the Nora E. Derrington’s discussion of Octavia Butler’s Kindred intriguing me so much that I subsequently bought the book as a birthday present for my sister. I also liked Eliza Bentley’s discussion of past signifiers in time travel classic Hot Tub Time Machine and Sorcha O’Brien’s exploration of design elements in Firefly/Serenity (a well-known TV series and film).

Space business meant that I was not able to enjoy much of the programme after that; my afternoon saw a lot of Hugo trophy related action in the run-up to the Retro Hugos being awarded as part of the opening ceremony. That saw me lurking backstage and handing trophies to the people who handed them to the presenters who handed them to the persons accepting the awards on behalf of the actual winners (all of whom have sadly shuffled off this mortal coil).

More of my amazing Worldcon pictures