The World Science Fiction convention was first held in 1939 and has been held every year since (apart from a break while the USA was fighting the Second World War). This year the 75th Worldcon was held in Helsinki in Finland. I was there, as was my beloved. We had previously been to the Worldcon held in London in 2014 and had liked it enough to give this one a go.

The event was being held in the Messukeskus conference centre. Arriving there by public transport involved walking through an urban passageway that felt like it could easily serve as a setting for some kind of Ballardian dystopia. However we were not at any point attacked by gangs of once-civilised people who had reverted to barbarism.

Registration proved to be quick and smooth (just the way I like it), a pleasant contrast to Loncon where it had involved queuing for a bit. That left us more time to get our bearings before going to our first event. This turned out to be the opening of the academic track of the convention. The bulk of programme contributions at SF conventions is provided by fans and authors, but Helsinki and London both also had an academic track in which brainy academic people delivered short papers on topics relevant to SF and fantasy. Often these brainy academic people are also SF fans and/or authors but it is in their brainy capacity that they appear on the academic track.

Tomi Huttunen introduced the concept of Estrangement, which derives from Russian art theorist Viktor Shklovsky who discussed the topic (Ostrananie) in an article in 1917. Huttunen and others on the academic track offered varying definitions of the concept, noting that different people in the past had come at this in a different way. For all that he was someone primarily associated with the avant-garde, Shklovsky’s own definition appeared to imply that all art involved a process of estrangement because of the difference between an actual thing and its artistic representation. Brecht later attempted his own definition, which appeared to be more about uncanny valley or the German concept of the unheimlich, which I found interesting as for all his ground-breaking approach to theatre Brecht had not particularly involved himself in work that strayed into non-realistic territory.

We left that session of the academic track early to attend the opening ceremony of the convention as a whole, but we could not get in as it was full. This proved to be a recurring theme of the convention’s first day, as there appeared to be too many people present for the number of events on and the sizes of the rooms in which they were being held. The congested nature of the corridor outside the rooms where most of the events were being held did not help matters either. Thus I missed a number of potentially interesting events, such as a presentation on cosmological alternatives to the Big Bang (an old favourite of mine as little precocious me flew the flag for the now largely forgotten Steady State theory) and a discussion on languages (like Finnish) that do not have gender-based grammar.

The next event I was actually able to squeeze into was another academic track session in which the boundaries between human and not human were discussed. I found Clare Wall’s discussion of works by the Canadian SF writers Larissa Lai and Margaret Atwood particularly interesting, which in both cases (the former’s Salt Fish Girl and the latter’s MaddAddam trilogy) deal with genetic engineering and things that look like people but genetically are not or which do not look like people but start to display disturbing human-like traits. I found myself thinking of other works that explored the human-animal boundary, like H.G. Wells’ The Island of Doctor Moreau or Stephen Gallagher’s Chimera (which dealt with genetically engineered human-animal hybrids that could be used for organ transplants or medical experiments without legal consequences). 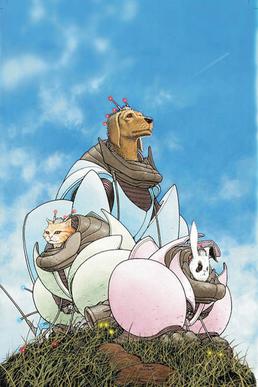 And then there was Jani Ylönen on We3 from 2004 by Grant Morrison and Frank Quitely, in which a dog, a rabbit and a cat are fitted with exo-skeletons, have their brains upgraded and are turned into killing machines. It is one of my favourite comics, managing to be a cute animal story while featuring scenes of terrifying violence and moments of heartbreaking pathos. The human-animal boundary here breaks down when the animals become intelligent enough that they start being able to talk to their human handlers, which shocks the project’s backers enough into ordering the animals’ destruction (triggering the plot as they escape and go on the run).

That a dog can be a killing machine that can talk to its handlers but still exhibit dog-like behaviours (he keeps asking “is good dog?”) is as unnerving to us as it is to the project’s backer, but Ylönen situates this in a continuum of “post-animals”, where human action has moved animals along from their natural animalistic state, as is the case with pets (and domesticated animals generally?). We3‘s plot resolves by the animals shedding their exo-skeletons and brain implants, becoming ordinary beasts again. That this reversion is presented positively calls to my mind the ambivalence about sentience seen in such religious legends as the consequences for Adam and Eve of consuming the fruit of the Tree of Knowledge.

Those two academic track sessions were all I got into on the convention’s first day. I left the centre somewhat dispirited, fearing that I was going to be spending the conference not getting into things because they were full or queuing to get into things for half an hour instead of being able to go from one event to another. I was also irked by the lack of food outlets in the conference centre that opened in the evening.