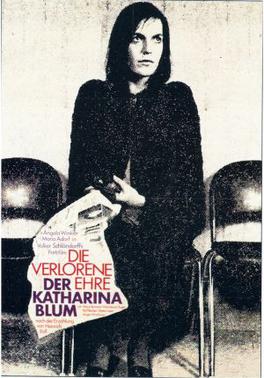 The next film I saw in the IFI’s paranoia season was this German film, directed by Volker Schlöndorff and Margarethe von Trotta, which dealt with the paranoia in that country arising from the terrorist campaign of the Red Army Faction and related groups. The eponymous Ms Blum meets a guy at a party, they fall for each other, she brings him home… and you can guess the rest (you’ll have to just imagine it, as the film does not treat viewers to a titillating shagfest). But then the following morning a load of heavily armed cops burst into her apartment demanding to know where the guy is, who it turns out is apparently some kind of dangerous radical, with the cops now suspecting that Blum is also in league with these ne’er-do-wells. She is subjected to somewhat intense interrogation while the chief cop enlists the aid of a sleazy journalist from fictional newspaper The Paper (in German Die Zeitung, clearly an analogue of tabloid shitesheet Bild) to poke around in her past and dredge up some dirt. While the film starts off as being about the scary cops, the sleazy journalist and the evils of the gutter press become the main antagonists. The sleazy journalist (played by Dieter Laser, who more recently appeared in The Human Centipede) is actually such a great villain with his mullety hairstyle and preening self-regard that it is a pity that he was not the starring character in a comedy; even as is he provides some great chortlesome moments, like when he breaks off from phoning in a story to shout at some departing ladies to wait for him. Angela Winkler is also great as Blum, showing her unravelling as she is battered by events beyond her control or even imagining. That she looks like an escapee from Belle & Sebastian did not hamper my enjoyment.

One final thing I should mention about the film is that it is set over Carnival, when the normally staid burgers of Cologne dress up in funny clothes and charge around the streets boozing and dancing raucously (with the season also providing a degree of licence for acts that would normally be considered sexual harassment). That sense of the normal rules of society temporarily breaking down plays well against Blum’s disorientation at the strange turn her life has taken. The film has its moments of odd humour, like Blum’s initial non-plussed reaction to armed cops storming her flat suggesting that this was not a particularly outlandish occurrence in 1970s Germany. There is also a funny scene where Blum’s employers and their friends are complaining about being dragged through the mud in The Paper only for one to cheerfully say “Well they’re not saying anything bad about me, but then I am a former Nazi!”.

It shows my instinctive bourgeois conformity that as I was watching the film I initially thought it ridiculously far-fetched – the very idea that the cops would form a false opinion about an innocent person and then subject them to aggressive interrogation! Then I remembered the likes of the Birmingham 6 and the Guildford 4 in the UK, or indeed the darkly farcical case of Nicky Kelly and Osgur Breatnach here in Ireland, and thought that maybe Ms Blum got off pretty lightly with the cops. She does not do so well with the journalist and the film is ultimately far more about the malign power of the gutter press than about abuse of power by the state’s agents. It felt a bit domestic compared to the big picture stories of the other films in the season but I think would still be enjoyed by those interested in film depictions of a troubled time in German history.