My write-up of Helsinki Worldcon continues. I am still discussing the second day. The previous episode can be seen here. 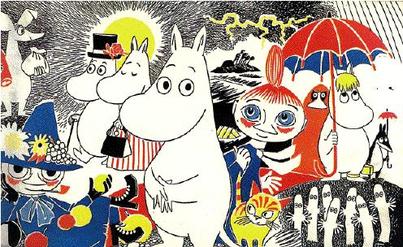 After the Tanith Lee discussion there were a lot of potentially interesting things happening but we felt that we had to go to a session on the Moomins (entitled Moomins!). As you know, these are character that appeared in books written and illustrated by Tove Jansson of Finland. They started life in books and then progressed to comics and subsequently to a succession of animated TV series. If you’ve never heard of them, the Moomins are vaguely hippopotamus shaped creatures that live in a house in Moominvalley and have a variety of strange friends and adopted family members. Moomin stories are pretty cute but also deal with subjects a bit darker and more existential than is normally expected in children’s books.

The discussion was interesting, with the panellists’ enthusiasm for the subject being evident. I enjoyed the trip through Jansson’s life with the Moomins, particularly the revelation that it was a British newspaper that commissioned her to write and draw the Moomin comic strip and that it was intended primarily as a diverting read primarily for adults rather than children. Jansson appears to be one of those writers who found herself almost resenting the demands made on her by her most successful work, feeling that time spent on the Moomins was keeping her from more important artistic activities (something those of us in wage slavery can readily sympathise with). However for all her tendency to include dark elements in the Moomin books, particularly the later ones (e.g. Moomintroll waking up early from hibernation and having to spend the winter alone in Moominvalley Midwinter or the Moomins’ friends’ sadness at the Moomins’ absence in Moominvalley in November), I did not particularly get the impression that she lived a life of misery and despair.

The panel discussed screen presentations of the Moomins. Sadly none of them were particularly familiar with the Polish stop motion animation series of the early 1980s, which for me is the definitive TV version, capturing the strangeness of the stories and the interplay between cuteness and menace (particularly well seen in the episode of the Hobgoblin’s Hat). While the 1990s cartoon was mentioned as having brought one of the panelists into the Moominverse, it appears to have left out all sinister elements and gone solely for the cute, cementing in the eyes of many the idea that the Moomins are only for kids.

I was thinking afterwards that it was a shame there was no discussion of the Moomins on the Worldcon academic track. The Moomins look like animals but behave like humans and so are clearly interstitial beings, thus clearly unheimlich and creators of an intense feeling of estrangement.


After that we caught a panel with the exciting title of Beyond the Cash Nexus, based on an injunction by Ursula Le Guin that SF writers should be imagining post capitalist futures. The panel was however a bit poor, with the panellists limiting themselves to trotting out a fairly simplistic list of anti-capitalist 101 complaints against the currently existing world economic system without even the shadow of any suggestion as to how a post-capitalist society would work; anything they said that moved towards policy suggestions was in the character of reforming the current system than modelling how it might be replaced. There was also a strange paradox between the panellists railing against bureaucracy and then proposing measures that would require a massive bureaucratic overhead to implement. And I was particularly struck by the naivety of a claim that industrial action by their workers will inevitably force corporations to pay their taxes, as it took no notice of the collapse in unionisation private sector organisations have seen over the last 40 years.

The final thing I saw that evening was a performance by the hip-hop act Clipping. Hip-hop is not normally a thing at Science Fiction conventions but Clipping’s album Splendor & Misery had been nominated for a Hugo Award in the best dramatic presentation (short) category. That category is normally contested by individual episode of TV programmes or short films but Splendor & Misery is a concept album telling the story of a revolt on a spaceship carrying slaves to another planet; Clipping are consciously placing it in the afro-futurist tradition of Sun Ra, Parliament/Funkadelic, Drexciya and so on. As a narrative and a fairly short album, the record met the Hugo eligibility requirements.

Clipping’s performance took place in one of the conference centre’s large function rooms. It was a strange place for a hip-hop concert, with everyone sitting in rows of seats as though they were going to be listening to a lecture. When Clipping came on though they informed the audience that there was space at the front and in the aisles, which led to a rush forward and the concert then progressed on more normal lines. Thereupon they bombed through the songs from their (short) album and delivered us some other exciting tunes.

Hip-hop is one of those things I am only so interested in on record but it always seems to pack a punch live. This performance was no exception, with Daveed Diggs proving to be an impressive frontman. The accompanying music recalled the fractured beats of artists on the UK’s Warp label more than what I associated with US hip-hop. At one point the music appeared to be nodding towards Delia Derbyshire’s realisation of the Doctor Who theme, but that may have been projection on my part.

Clipping certainly won over the audience present, though of course by this point the votes for the Hugo Awards had already been cast.

After this we tried going to a party hosted by the Dublin Worldcon bid team but they had run out of booze and the convention centre bar was overwhelmed by the number of thirsty SF fans, so we escaped back to where we were staying and had a last drink in the Tintin Tango café.