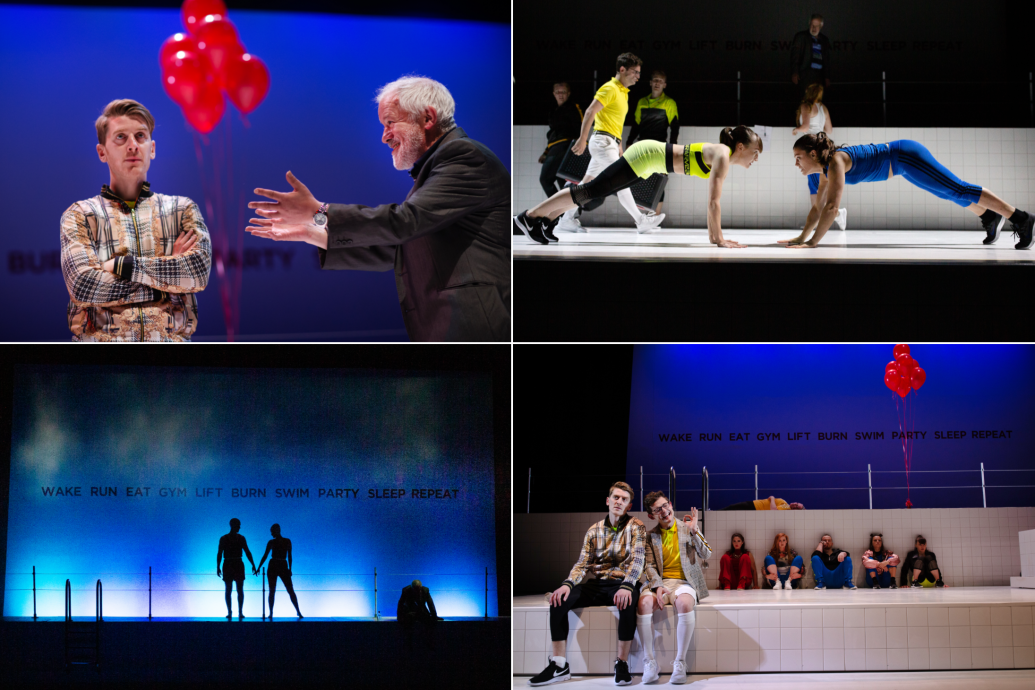 I do not go to the theatre as much as I ought to, but recently I found myself attending a performance of this play in the O’Reilly Theatre, which was being staged as part of the Dublin Fringe Festival. Gym Swim Party was co-written by Danielle Galligan and Gavin Kostick (my old friend and quaffing partner) and co-directed by Eddie Kay, Megan Kennedy & Louise Lowe. That is a lot of co-directors and I think it might be testament to the kind of show it was, as the production interspersed the more usual actor dialogue stuff with movement and dance elements. The initial premise of the piece was that two rival gym chains were locked in a battle for supremacy over Dublin’s fitness scene and had decided to settle things once and for all in a fit-off that saw their instructors compete in a variety of activities. This part was the least play-like and did feel a bit like you were watching an actual dance-off (partly thanks to the pumping music of a kind that I understand to be played in gyms (a class of establishment I do not frequent)) only with people doing step aerobics rather than dance as such. This bit was great, all high energy and basically fun-to-watch buff people do physical stuff.

I was thinking initially that maybe the whole show would be the contest, which could have been fun but maybe difficult to sustain (also sweaty for the actors), but one of the chains eventually crushed the other, absorbing their business and leaving its gym instructors to beg for new jobs with the victors. At this point audience members with a classical education were beginning to twig that there was some kind of Trojan War referencing going on, both in the names of the characters and the losing company being called Trojan Gyms. And in fact as the post-face-off part of the show unfolds it becomes apparent that this basically an adaptation of Agamemnon by Aeschylus. You will recall that this is the one about Agamemnon returning home from the Trojan War with new concubine Cassandra (spoils of war) only to be murdered in the bath by his wife Clytemnestra and her lover (thereby fulfilling a prophecy that he would die neither on land or at sea). In this one Aggie and Cass (still some kind of weird prophet) have fallen in love; he plans to divorce his wife Clem (played by Danielle Galligan) to be with her, but he meets his doom in the jacuzzi.

Now, you may ask, does the world need more retellings of Greek myths? My own view is that they are great stories and they are worth recycling. This production is to be saluted for setting it in the present day but not trying to make it Relevant – there is no suggestion that the Trojan War is a metaphor for Brexit or that Aggie is an analogue of Donald Trump or that the whole point of the thing is to Make Us Think about some contemporary issue. There are maybe some problems around the edges, like the way it goes for the resolutely kitchen sink setting but then retains the mythic idea of Cass as a seer thanks to an encounter with the Sun God. They also made no attempt to shoehorn the Trojan Horse into the story and I was struck by how Helen does not appear and is only alluded to obliquely when Clem mentions being the less attractive sister. Frankly though the energetic exuberance of the production had me thinking that it would be churlish to quibble.

Imagine you are coming to Dublin this summer, perhaps for a giant science fiction convention taking place from the 15th to the 19th of August, and you are also interested in going to the theatre. What theatres are there in Dublin and what are they showing around then that might tickle your fancy? Here for your delectation is just such a list of Dublin theatre venues and what they have on in the middle of August. 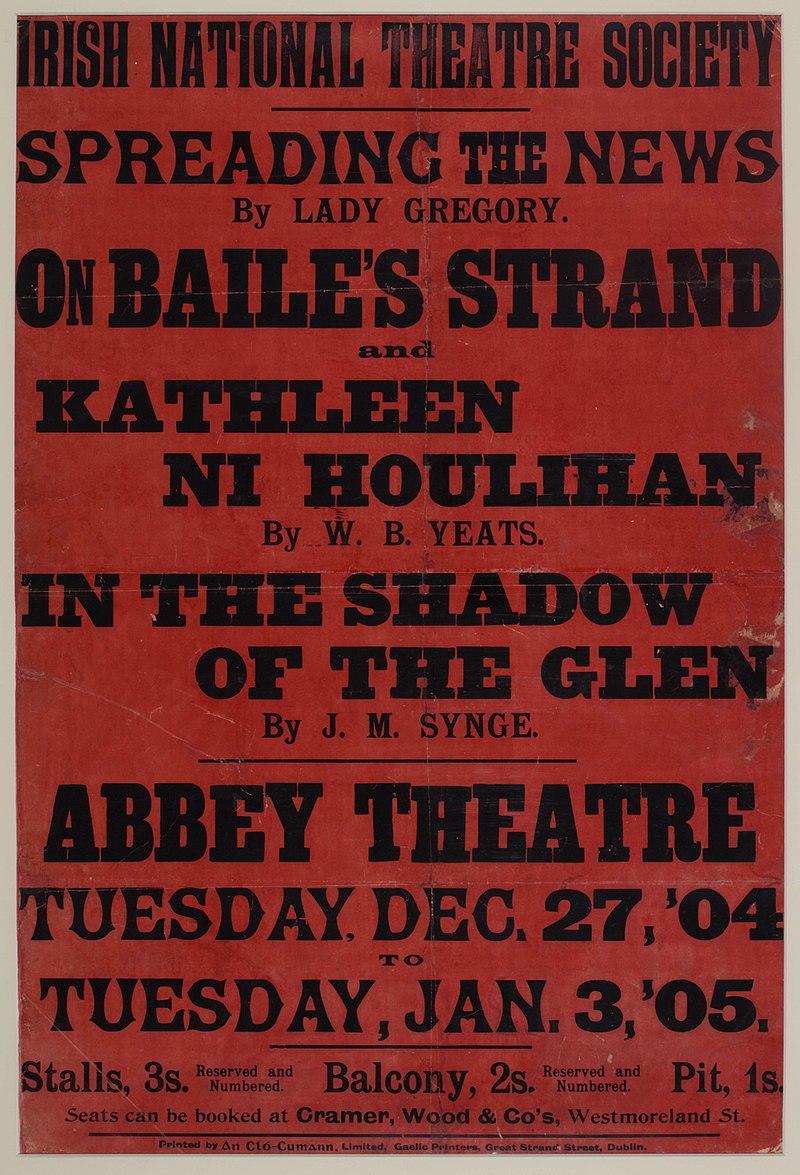 Founded by WB Yeats and Lady Gregory, the Abbey Theatre is Ireland’s national theatre and is located close to the Abbey Luas stop on Abbey Street. By tradition it is always mired in controversy of some sort. It has two things listed for August, The Hunger (not an adaptation of the film but a new opera about the famine of the 1840s), and on its second stage, Ask Too Much of Me, a play from the National Youth Theatre.

Also long-established, the Gate Theatre is where Orson Welles made his acting debut and is located on Parnell Square at the northern end of O’Connell Street. In August the revival of Roddy Doyle’s adaptation of his popular novel and film The Snapper will be nearing the end of its run.

The Bord Gáis Energy Theatre is located across the Liffey from the the Convention Centre in Grand Canal Dock. It hosts big touring productions, which may be your thing even if they are not mine. In the middle of August the theatre will be staging The Bodyguard and Kinky Boots.

The Project Arts Centre in Temple Bar has two stages and puts on work that is generally of high quality but also a bit alternative. It also hosts art exhibitions. At time of writing they appear not to have programmed August yet.

The New Theatre is also in Temple Bar and can be found at the back of Connolly Books, Dublin’s premier communist bookshop. This is a small theatre that puts on more intimate productions. In the middle of August they are staging Skin Tight, an edgy sounding play from New Zealand, and An Evening with Great Irish Writers, a one-man exploration of the great writers of yore.

The Smock Alley Theatre can be found at the western edge of Temple Bar. In mid August they are staging The Roaring Banshees, a tale of Irish women gangsters in 1920s Chicago.

As the name suggests, Bewley’s Café Theatre can be found in Bewley’s Café on Grafton Street. It occasionally stages plays in the evenings but is best known for lunchtime theatre productions. In mid August the theatre is staging To Hell in a Handbag, which appears to be about two minor characters from Oscar Wilde’s The Importance of Being Earnest.

The Gaiety Theatre dates back to Victorian times and can be found off Grafton Street on South King Street. In August they are staging Riverdance.

The Olympia Theatre on Dame Street also dates back to the Victorian era. In mid-August they are presenting an adaptation of Little Miss Sunshine and then Tinder – A Musical Comedy.

Poster from the Abbey’s opening run in 1904 (Wikipedia)