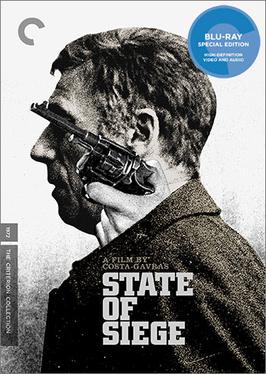 The fourth offering in the IFI’s paranoia season was another Costa-Gavras film, this time set in Uruguay during the urban guerrilla campaign of the Tupamaros. Like Z and Missing (another great film from Costa-Gavras and one whose throbbing Vangelis soundtrack should be of interest to all readers) it is based on real events, specifically the kidnapping of a US advisor to the local security forces. The film follows the state actors as they try to locate and rescue the American (played by Yves Montand) while at the same time his role in promoting the use of torture and massive human rights violations is revealed; the film is based on the 1970 abduction and murder of CIA agent Dan Mitrone.

There is a lot to like about the film, notably its stunning visual sense (the opening scene of a massive security operation on a busy highway is a feast for the eyes) and its wry humour, but for me it was a bit weak politically and that let it down. In a film like The Battle of Algiers, the guerrillas are shown as active parties to the conflict, committing various unsavoury acts. In State of Siege the Tupamaros do not seem to do very much at all: apart from kidnapping the American and a couple of other people, they seem curiously inactive and not even remotely like the kind of insurgency that would inspire the kind of massive state response the film shows. They seem like a kind of comedy urban guerrilla outfit, going to massive efforts so that they can then just sit around and chat about Marxist philosophy. I also found myself that the 2003 film Good Morning, Night, which deals with the kidnapping of Italian prime minister Aldo Moro, is a far better though v different film about an urban guerrilla kidnapping. Nevertheless the film is worthy of the attention of all true cinephiles.