Previous instalments of my Worldcon write-up can be read here and here.

For me this morning began with breakfast and then a panel on Folk Horror, featuring Neil Williamson, Lisa Tuttle, Tim Major and Ramsey Campbell. If you have been a member of the Folk Horror Revival group on Facebook for some time now or indeed if you attended the 2014 Fiend in the Furrows conference in Belfast or the British Museum’s Folk Horror Revival event in 2016 (my account of which will soon be available) then some of this ground will be broadly familiar. The folk horror term appears to have been conjured up retrospectively to group three films from the late 1960s and early 1970s (The Wicker Man, Witchfinder General, and Blood on Satan’s Claw), all set in the British countryside and appearing to share themes connected with disturbing intrusions into the modern or modernising world of sinister elements from the past. The panel toured through some familiar literary, dramatic and musical works influenced by Folk Horror ideas or lumped into the genre but some of the recommendations here went beyond what is normally recommended in these contexts. I particularly liked the sound of Ghost Wall, a short novel by Sarah Moss about things going wrong when people attempt some Iron Age reenactment (which reminded me of that 1978 TV documentary about people living in an Iron Age village). Lisa Tuttle’s highlighting of the music of The Handsome Family also piqued my interest; they are one of those acts who plays here fairly frequently and are often praised but I have never properly engaged with their work. 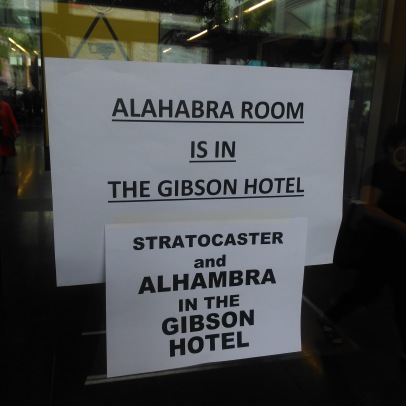 I do wonder nevertheless how long this Folk Horror revival has left to run: can people indefinitely discuss the same three films and a whole succession of other things that to a greater or lesser degree are not strictly folk horror? For all that, I was struck by a remark of Lisa Tuttle near the panel’s close: that what is scary in Folk Horror is belief and the way the antagonists in Folk Horror narratives are consumed by a faith that is untroubled by facts or countervailing evidence. In a world where so many countries are currently in the grip of irrational politicians appealing to the atavistic impulses of their followers that kind of analysis seemed particularly on point.

That was pretty much it for programme items for me on the Saturday. Much of the rest of the time I spent at the Point Square information desk. The addition of a sign at the entrance to the Odeon complex telling people that the Alhambra and Stratocaster rooms were in the Gibson Hotel reduced rather than eliminated the numbers of people asking me where they were.

I did have time to wander around the dealers area in the Convention Centre, where I added to my Unread Books Mountain and met hardnut author Conor Kostick, who told me all about that LitRPG stuff that he is now involved in. I also had time for a few pints with some of my buds in Martin’s Bar (named after the late Martin Hoare, Worldcon’s bar manager). My memories are a bit hazy but I seem to recall a conversation about panama hats. Sadly I could not stay forever as I was on cat wrangling duties that evening and had to return home to attend to the needs of Billy Edwards.

More of my Worldcon pictures

One thought on “An Irish Worldcon, Part 3: Saturday”