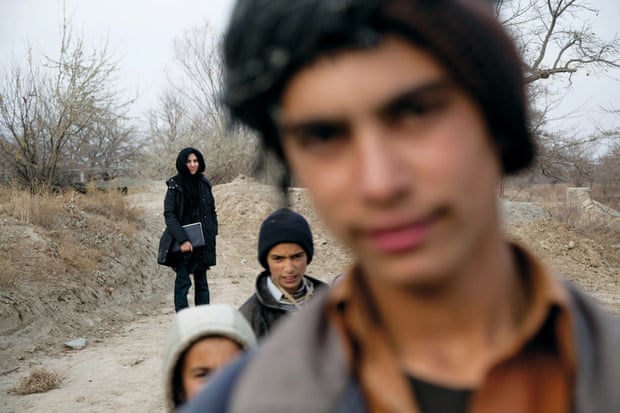 This a documentary film about PJ Harvey recording an album, though it might be more accurately described as an art film hung around PJ Harvey recording an album (said album turning out to be The Hope Six Demolition Project from 2016, indicating how long it takes to put this kind of film together). The film intercuts PJ Harvey and her buds (people like John Parish, Mick Harvey, Flood, James Johnston, Terry Edwards etc.) recording with scenes showing Harvey travelling around the world, ostensibly to gain inspiration for her songwriting.

I found the recording scenes fascinating, as the recording process was itself set up as an art project, with people able to come in and gawp at the musicians doing their stuff through a one-way mirror. The globe-trotting scenes were a bit more hit and miss. These saw the Peej heading off to Washington DC (which from memory is pretty obvious from the album, which does a lot of name-checking that city), but also to Afghanistan and Syria. The Washington stuff, which saw Harvey going to a black gospel church and hanging out with the youth seemed a bit too much like that bit in Rattle and Hum where Bongo goes all gospel; all that was really missing was a gospel version of some PJ Harvey classic like ‘Down By The Water’. The stuff in more troubled parts of the world featured some genuinely funny moments (like the bit where a Kabul traffic cop loses it and starts kicking cars) and moments of fascinating musicality, notably Harvey attending what seems to be a Sufi mystical gathering where the music is oddly reminiscent of those chain-gang work-songs from the southern United States, but overall it felt like whitey holidaying in other people’s misery, with an added disturbing fear that Harvey was going to go all Paul Simon and absorb the music of her Afghan pals into her new record. The scene with refugees trying to cross the border between Greece and the Country Formerly Known as the Former Yugoslav Republic of Macedonia is genuinely depressing but as Harvey was not even present there you have to wonder what it is doing in the film.

On balance therefore I rank this film as an embarrassing failure but would still recommend it to everyone who loves the music of PJ Harvey.

Seeing this film earlier in the year was me belatedly climbing onboard the Peter Strickland express. It tells of a weird department store and a cursed dress, with the film having the overall sense of being a mashup of Are You Being Served? and the darker works of David Lynch. It all feels very Scarfolk, with the shop seeming to exist in that mysterious long 1970s of yore, an effect accentuated by the curious early synthesiser music soundtrack by Cavern of Anti-Matter; the general aesthetic also feels a bit retro, unsurprising given Strickland’s rep as an aficionado of Italian trash films of the 1970s. That all sounds very appealing but for me the film had considerable problems, the greatest of which was its length. I think it could have done without the whole second plot. The film’s lurches in mood also seemed a bit problematic, with it being at times very funny (in a strange way) before going back to menacing horror. My sense of the film was that it was one where at the beginning the creator(s) threw out every possible idea in a brainstorming session, and then used them all. That would probably explain the length. For all that, I still think the film was worth seeing, given its appealing visual aesthetic, the strong performances from the actors and its general strangeness.

Just before it began I noticed that In Fabric received an 18 certificate from the Irish film censor. Curious readers will be pleased to hear that this most probably is for the scene in which some of the shop assistants sex up a showroom dummy for the delight of a strange voyeuristic onanist. 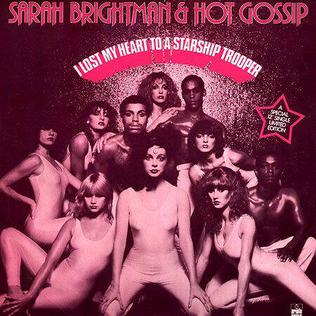 All the space stuff I was doing over the summer decided me that I wanted to download this amazing tune, which is one of very few instances in which a dance troupe released a record (joined of course by the charming Ms Brightman). Musical flourishes reference popular science fiction themes, while we are provided with lyrics to enjoy such as the following:

Tell me, Captain Strange, do you feel my devotion?
Or are you like a droid, devoid of emotion?
Encounters one and two are not enough for me –
What my body needs is close encounter three!

And then there is the chorus:

I lost my heart to a Starship Trooper!
Crashing light in hyperspace!
Fighting for the Federation!
Hand in hand we’ll conquer space!

This obviously is from before Blake’s 7 turned people against federations.

Don’t waste your time reading my words – play the video and appreciate the tune in all its fabulousness.