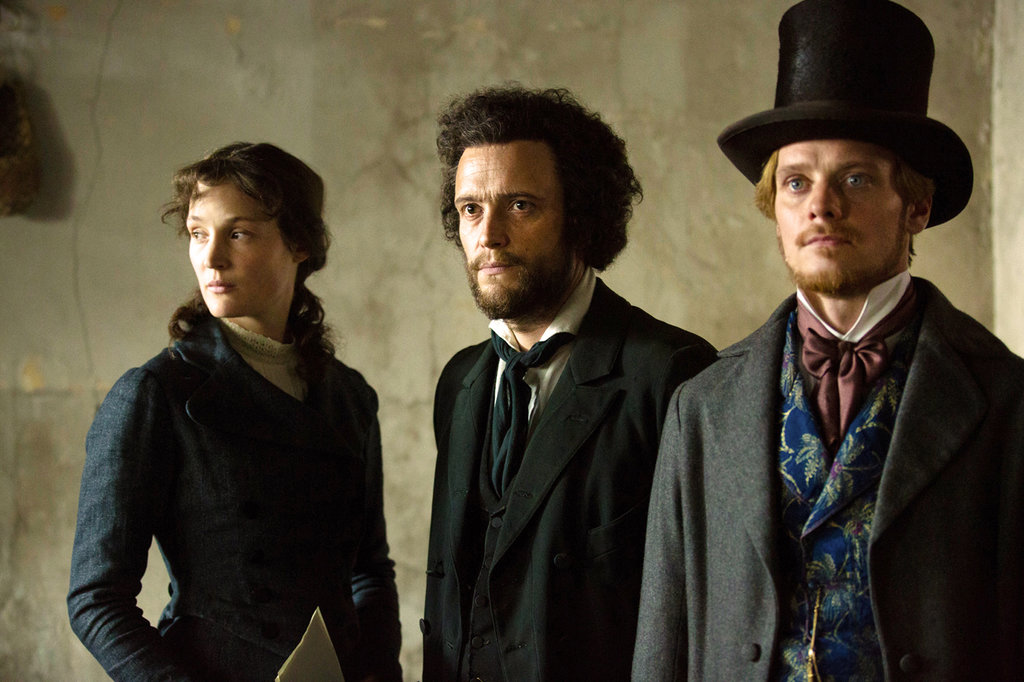 This 2017 film tells the tale of German philosopher Karl Marx and his development of a materialist theory of history based on a synthesis of Hegelian ideas and the theories of various English and Scottish political economists. This year sees the 200th anniversary of Marx’s birth, which has led to a certain revival of interest in his writings and those of his collaborator, Friedrich Engels. Drawing on this increased interest in the work of Marx and Engels, this film (directed by Raoul Peck) shows them meeting and becoming friends before developing their theories, ending with the publication of the first of their better known works. While philosophers are often seen as having their heads in the clouds and being divorced from everyday reality, the film shows how Marx and Engels developed their ideas through close observation of the struggles of the lower orders of society and their own involvement in radical politics.

The opening scene illustrates a key episode in the development of Marx’s ideas. Some poor folk are shown gathering wood in a forest, before a load of uniformed bailiffs come and smash their heads in with sticks. In the early 19th century in Germany the rule of codified law was replacing customary rights that had built up over time. Progressive opinion generally saw this as a good thing, akin to the suppression of superstition and the embrace of rationalism. The issue of the wood gatherers ran counter to that; these people had previously enjoyed a customary right to gather fallen wood from privately owned forests and they earned their living by selling this as firewood. But now the men of property who held title to the forests had arranged for the passing of a law that gave them exclusive rights to the forests, annulling previous customary rights. As Marx outlines in a voiceover (quoting from an article on the subject he wrote for the Rheinische Zeitung), access to political power allows the naked self-interest of the forest owners to triumph over the rights previously enjoyed by the wood gatherers. Progress aids not all mankind but the already rich and powerful.

However the film is not all philosophical theorising or people having their heads smashed in by lackeys of the rich. There are also plenty of roffles, not least through the blooming bromance between Marx and Engels (played by August Diehl and Stefan Konarske respectively), which sees their respective wife and ladyfriend very much relegated to second place as the two of them get up to the kind of pranks and japes that only materialist philosophers can manage. The Mythos Hoedown scenes where every 19th century revolutionary ever get together to party are funny if you are into that kind of thing. Likewise the scene where the staff of the Rheinische Zeitung argue about obscure points of principle as the cops are bursting down the doors will strike a chord with anyone who has ever dipped their toe into the waters of far left politics. I was amused by the French language joke about one of the first brainy books Marx and Engels write together while the film also mentions that old canard about an early draft of The Communist Manifesto beginning with a reference to a Bogeyman stalking Europe.

I should mention too that it the film is not a complete sausagefest either. Jenny Marx (Karl’s aristocratic but radical wife, played by Vicky Krieps) gets a look-in but the real female star is Hannah Steele playing Mary Burns, Engels’ lover and his entry-point into the world of the working class in Manchester.

Enjoyable as the film was, for me it ended on a sad note. We see Marx taking over the League of the Just, a radical organisation, transforming it into the Communist League. He and Engels write The Communist Manifesto and it comes rolling off the printing presses…. and then there is this strange montage sequence of images from their time to our own, set to Bob Dylan’s ‘Like A Rolling Stone’, with the images meant to convey a sense of Marx’s influence and lasting relevance after all these years. For me though they were like a cavalcade of disappointment. Marxism had its run and it failed as a principle for organising societies: Marx and Engels were great at critiquing the emerging industrial capitalism but Marxists never developed a working idea of how a better society could be organised (or if they did they kept this idea to themselves and did not bother to apply it in any of the countries that Marxists found themselves ruling). Far from establishing the continued relevance of Marxism, for me the montage more solidly rooted the ideas of Marx and Engels in the past.