Skip to content
Home1/1/1818 “Frankenstein”: the dawn of science fiction 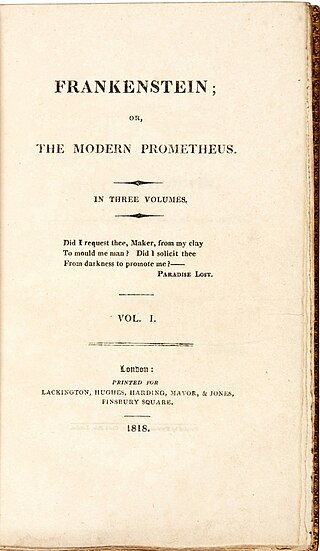 Two hundred years ago today the novel Frankenstein; or, the Modern Prometheus was published. Its author was the 20 year old Mary Shelley. The novel’s strange gestation is well-known. Shelley and others, including her lover Percy Shelley and Lord Byron, were staying in the Villa Diodati by Lake Geneva in Switzerland. Seeking to amuse themselves, they endeavoured to create ghost stories. In a dream Shelley imagined a scientist engaged in the process of creating life; the thought horrified her and from the dream came the novel.

Frankenstein is sometimes hailed as the first science fiction novel. The eponymous scientist creates his Creature not through magic but through science, though the exact processes by which he does so are not described (supposedly to prevent readers from replicating his obscene experiments). Nowadays most people know Frankenstein through its many film adaptations but the novel has its charms and is worth exploring. Much of the book deals with Shelley’s progressive social and political ideas, with a recurring question being whether the Creature is an evil monster or an unfortunate driven to terrible acts by the rejection of its creator.

Shelley’s later writings may well have produced better books than her first novel. Nevertheless, in Frankenstein she created stories and characters that have become modern myths, cautionary tales for us of the dangers of unfettered science.